Luuk de Jong joins PSV on a five-year deal from Borussia Monchengladbach. He spent the second half of last season on loan at Newcastle United. Before he moved to Germany, he had scored 41 goals in 91 Eredivisie appearances for De Graafschap and FC Twente. 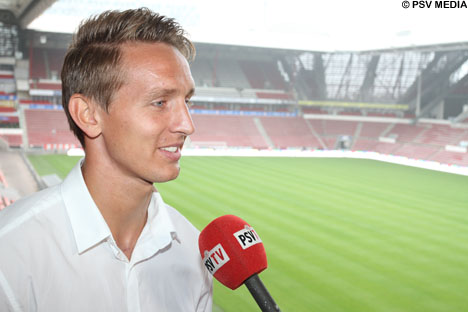 De Jong completed his move to the Philips Stadion after he had successfully passed his medical. He will join his new team-mates on Monday. The new signing will wear the number nine shirt. De Jong told PSV TV that he cannot wait to start pre-season training. “I want to get back on the field and show my qualities. The talks with PSV have been very positive and I’m very much looking forward to playing here”, he said.

23-year-old Luuk de Jong started his professional career with De Graafschap. He joined their youth set-up at the age of ten and made his first-team debut in the 2008-09 season. De Jong, born in Switzerland where his parents played professional volleyball, was rewarded for a very fine first season at De Graafschap with a move to FC Twente. The younger brother of Newcastle United striker Siem de Jong was called up to the Netherlands squad during his stint in Enschede. He made his Holland debut in the friendly against Austria on 9 February 2011 and scored his first goal with the nationals quad in the 2-0 Euro 2012 qualifying win over Finland. Luuk de Jong has been capped seven times so far.

De Jong turned out to be a prolific goalscorer for FC Twente, finding the back of the net 37 times in 65 Eredivisie matches in the 2010-2011 seasons. He also was on target in the KNVB Beker tournament and in European matches. De Jong won the Eredivisie title and the Super Cup with FC Twente in 2011 and lifted the KNVB Beker and the Super Cup in 2012 as well. He continued his career in Germany with Borussia Monchengladbach in 2012, scoring six goals in 36 Bundesliga appearances. He spent the second half of last season on loan at Newcastle United and made twelve Premier League appearances. De Jong now returns to the Dutch Eredivisie.