PSV U21 thrashed Telstar 6-0 at De Herdgang training facilities on Friday night. The visitors were reduced to ten men on 29 minutes when Lopes Cabral was sent off for a professional foul. Dennis Haar’s side have 21 points from fourteen games.

Sparkling first-half display
PSV U21 put in a sparkling first-half display against Telstar and were rewarded for their attacking ideas with four goals. Albert Gudmundsson opened the scoring on 13 minutes. Sam Lammers rounded his marker and played in the Icelander who tapped home from close range: 1-0. Three minutes later, PSV U21 doubled the lead. Matthias Verreth intercepted a poor pass before blasting home: 2-0. Donyell Malen was fouled in the box on 29 minutes; he stepped up to take the resulting penalty himself and scored his first shirt in a PSV shirt: 3-0 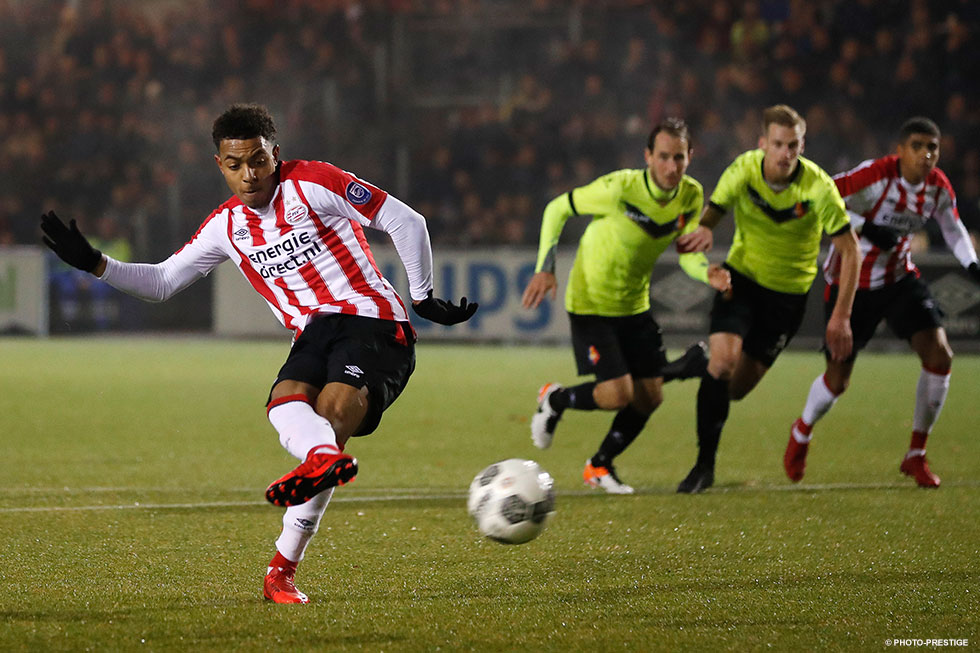 Donyell Malen scored his first goal in a PSV shirt

Malen struck twice
PSV U21 made it four on the stroke of half-time, when Malen was at the end of a well-worked move. HT: 4-0. Dante Rigo scored the fifth goal of the match five minutes into the second half. The Belgian superbly curled a free kick past Telstar keeper Rody de Boer: 5-0.  PSV U21 took their foot off the pedal but substitute Nikolai Laursen got his name on the score sheet when he made it 6-0 in the 71st minute.