PSV U21 have moved to fourth place in the Jupiler League, following a 1-0 win over MVV Maastricht on Monday night. A Laros Duarte goal on 43 minutes separated the two sides.

Game got going after twenty minutes
The game got going after twenty minutes when Donyell Malen sent an effort on target. The winger, who made his first-team debut against PEC Zwolle on Saturday, wriggled his way into the PEC Zwolle box before unleashing a vicious shot that keeper Verrips managed to push away for a corner. And there was more to come. Eloy Room pulled off a number of saves to deny MVV forwards and at the other end Verrips was called into action when Bram van Vlerken and Cody Gakpo delivered a shot from close range. But the MVV Maastricht custodian was left with no chance on 43 minutes when  Laros Duarte slotted home. HT: 1-0. 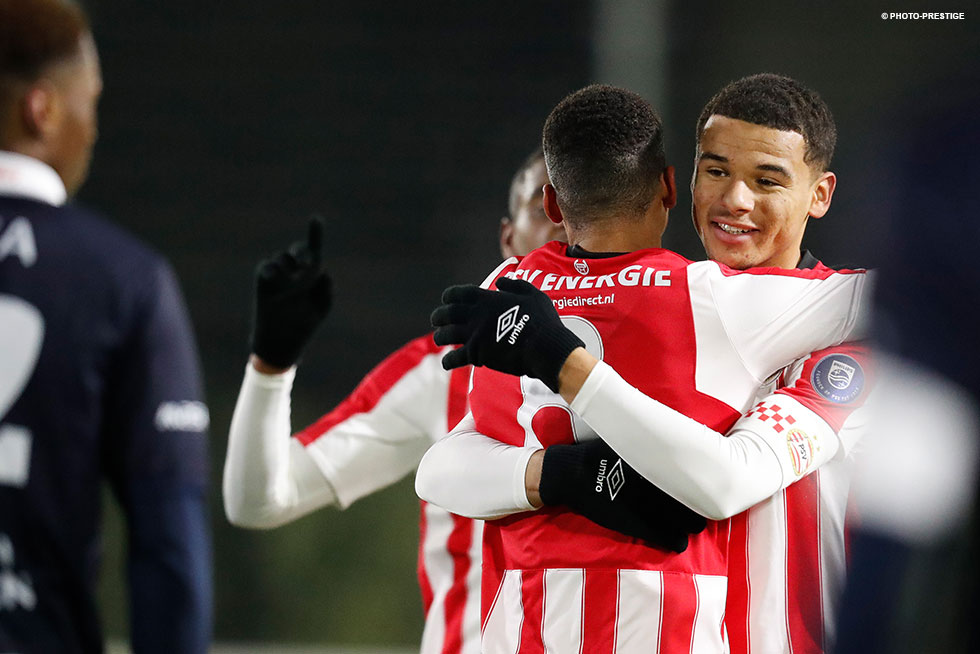 Laros Duarte is mobbed by jubilant team mates after he had opened the scoring for PSV U21.

Gakpo set up Laursen
Sam Lammers (assist from Malen) and Malen himself (solo run) had chances to double PSV U21’s lead after the break. MVV Maastricht could not capitalise on Armando Obispo’s defensive slip, as Eloy Room was quick to leave his line. Gakpo set up substitute Nikolai Laursen in the closing stages but the Danish forward failed to take his chance. FT: 1-0.