PSV U21 crashed to a heavy 5-0 defeat at FC Den Bosch on Friday night.

FC Den Bosch dominated possession
PSV U21, who were without their captain Armando Obispo, could not prevent the hosts from dominating possession. The home side pinned Dennis Haar’s side back onto their own half but could not create any meaningful chances in the opening exchanges. They started to press on the half hour mark and sent in some inviting crosses that PSV U21 goalkeeper Yanick van Osch managed to gather. The deadlock was suddenly broken on the stroke of half time when referee Freek van Herk pointed at the spot after Jurich Carolina had handled the ball. FC Den Bosch captain Nick Vossebelt converted the resulting spot kick. HT: 1-0. 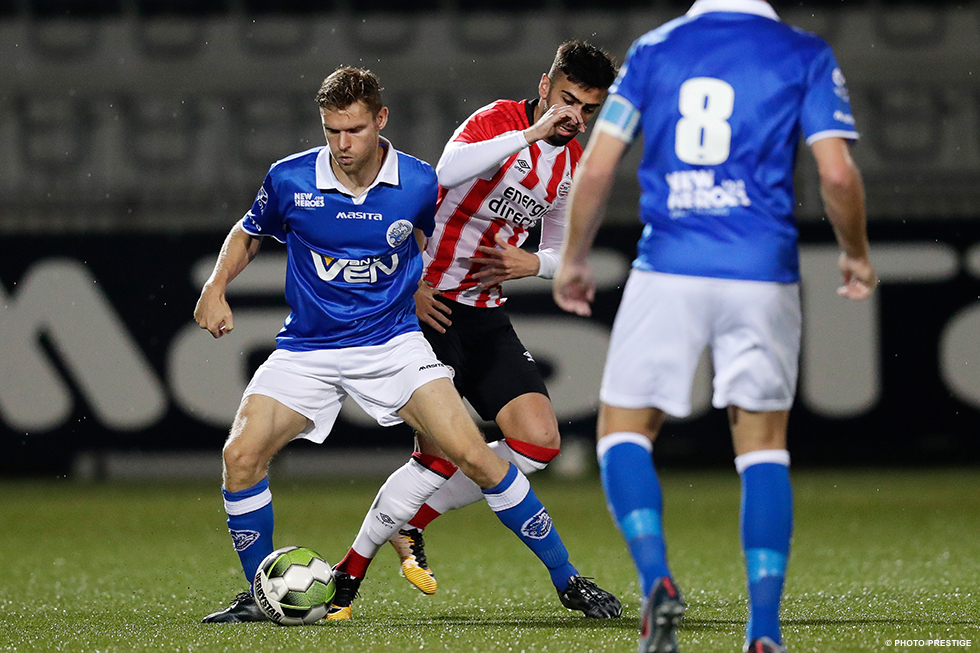 FC Den Bosch captain Nick Vossebelt (pictured on the back) opened the scoring from the spot.

Nick Vossebelt completed hat trick
The hosts soon doubled the lead after the break. Striker Kaars slotted home after he had cleverly been played clean through by Bouyaghlafen: 2-0. Nick Vossebelt made it three in the 63rd minute, again from the penalty spot. PSV U21 had a fine opportunity to reduce the deficit when they were awarded a penalty on 70 minutes. Dirk Abels was hauled down in the box but Olivier Rommens missed his penalty. Karim Bannani came on as a substitute and made his PSV U21 debut. Nick Vossebelt completed his hat trick on 71 minutes, while substitute Siani rubbed more salt in PSV U21’s wounds when he found the back of the net eleven minutes from time. FT: 5-0.