PSV needed two late goals from Ibrahim Sangeré and Ryan Thomas to ensure a 2-1 win over Sparta Rotterdam in a thrilling game in the Philips Stadion. Roger Schmidt’s team could not break down the visitors' stubborn defence until the 82nd minute when Sangeré, who put in a man-of-the-match performance, broke the deadlock.

Bright start
PSV got off to a bright start, looking to score an early goal and Maduka Okoye was tested several times. Sparta’s goalkeeper stretched to full length to palm away a fierce shot from Sangaré in the 11th minute. The Ivory Coast midfielder had another chance one minute later with a header on target, but Okoye made another reflex save to deny him. PSV kept on pushing as Sparta kept nine men behind the ball. The hosts created a host of chances but could not convert their dominance into goals.

A terrific atmosphere
PSV’s defence conceded nothing in the opening thirty minutes to the delight of the home fans who were in good voice and created a terrific atmosphere. PSV bombarded the Sparta goal but the goal fell at the other hand. Vito van Crooij had the ball in the net but the goal was ruled out for handball. PSV continued to press in the final third and Marco van Ginkel had a chance to open the scoring, but sent his header straight at Okoye. HT: 0-0. 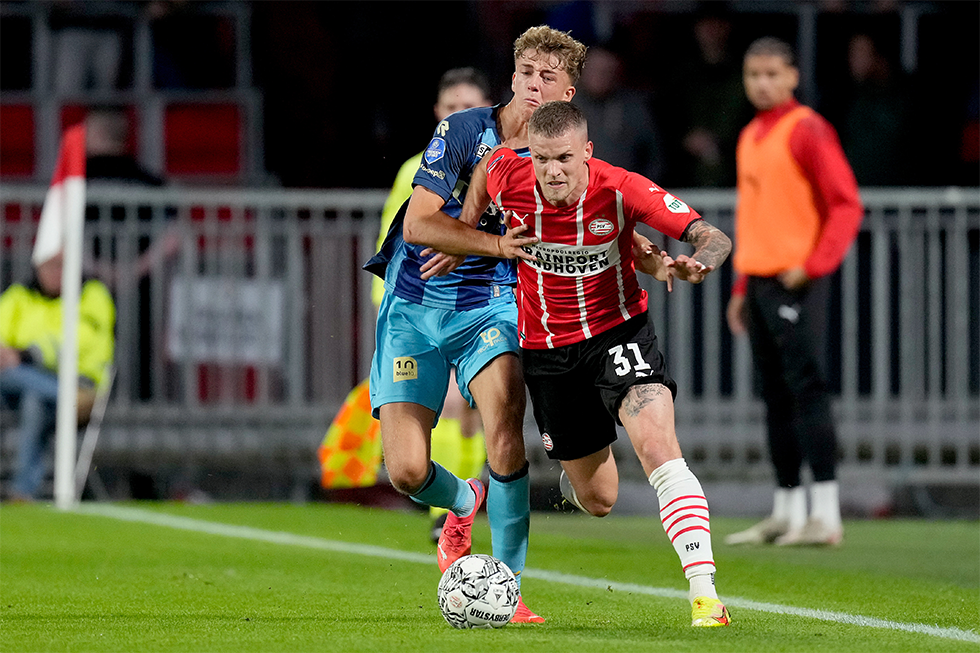 PSV kept on creating chances
The second half continued in the same vein as the first had ended. They kept on creating chances as Sanagré fired over the bar and Zahavi had an effort blocked. Okoye pulled off another massive save to push away Doan Ritsu’s effort from the top corner of the net. PSV won a free kick after a foul on Gakpo on the edge of the penalty area. Zahavi blasted the free kick just over the bar and luck was not on PSV’s side when a ball was cleared off the line and Zahavi hit the inside of the bar before the ball bounced back into the field. Zahavi was at the end of Phillipp Mwene’s fine cross but Okoye, again, made one of the best saves of the season to stop his downward header. The home crowd got behind their team as PSV went in search of a late winner.

Super Sangaré
Sangaré became the goal scoring hero, when he finally broke the deadlock in the 82nd minute. He rounded two defenders and created some space for himself before unleashing an unstoppable fierce strike into the top corner of the net: 1-0. Substitute Ryan Thomas doubled the lead five minutes later. Cody Gakpo sent in a perfect low cross from the left and the New Zealand midfielder tapped home from close range: 2-0. PSV breathed a sigh of relief and  Yorbe Vertessen came off the bench to replace Eran Zahavi. Sparta, however, pulled one goal back in the 90th minute. PSV lost the ball in midfield and German winger Mario Engels broke free and put his countryman Lennart Thy in front of goal: 2-1. PSV wasted a great opportunity to add a third goal at the death. They move to second place in the Eredivisie table, with 18 points from eight games, one point behind leaders Ajax.