Héctor Moreno headed home the winning goal for PSV in their 1-0 win over AZ at the Philips Stadion on Sunday afternoon. PSV are on top of the table with two wins from as many games, along with Feyenoord, Excelsior and ADO Den Haag.

PSV dominate without creating big chances
The first chance of the game fell to PSV. Willems delivered a fine cross in the second minute but De Jong just could not connect. At the other end, AZ had a great goal scoring opportunity after Pereiro had been robbed off the ball, but Guardado pulled off an excellent last ditch tackle to deny Friday on six minutes. The visitors were forced to make their first change on 18 minutes. Markus Henriksen was stretchered off the pitch after colliding with Santiago Arias. Joris van Overeem came off the bench to replace him.
PSV saw plenty of the ball and De Jong had a half chance but could not control Pröpper’s wayward cross. Phillip Cocu’s men pushed AZ back deeper into their own half and created a number of meaningful chances. First AZ goalkeeper Rochet made a splendid save from Luuk de Jong’s header before Davy Pröpper sent his effort across the face of goal in the 27th minute. But AZ had their moments as well. Zoet heaved a sigh of relief when Alireza Jahanbakhsh skewed his shot wide of the far post. PSV worked hard to find a way through the determined AZ defence and almost took the lead in the 42nd minute. Locadia sent in an inviting cross but Vlaar prevented De Jong from heading home the opening goal. Half-time score: 0-0. 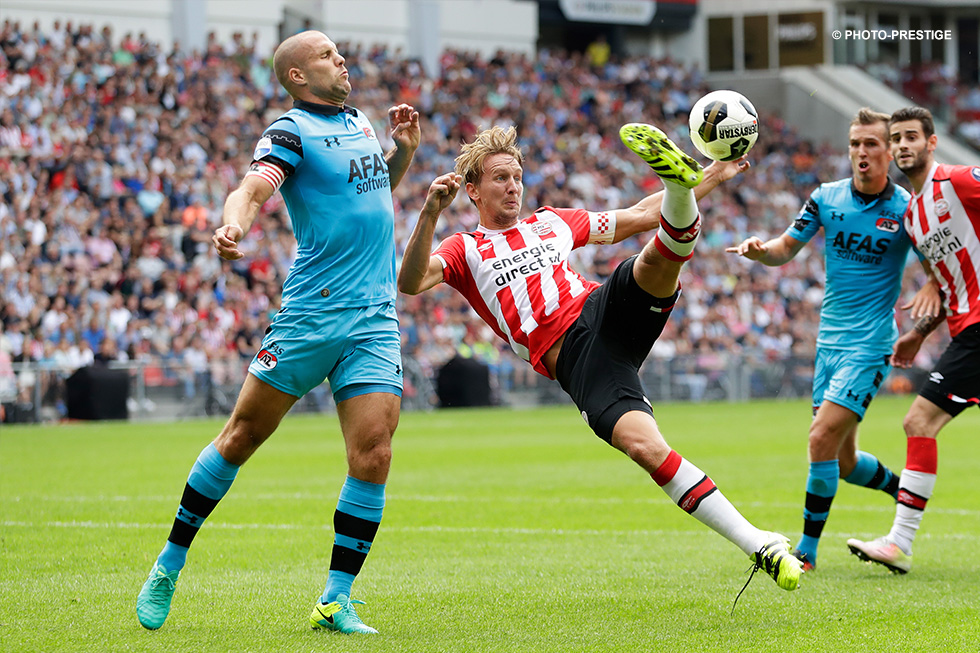 Moreno scored winning goal
PSV came flying out of the blocks and pinned AZ deep into their own half. Rochet quickly left his line to deny Narsingh and not surprisingly PSV made the breakthrough, six minutes into the second half. Jetro Willems delivered another pinpoint left-footed cross from the right wing into the six-yard box and defender Héctor Moreno rose high and headed home into the left top corner against one of his old clubs: 1-0.
PSV were fully in control and Rochet went down well on 60 minutes to De Jong. Narsingh found Hendrix, but the midfielder’s header went just over the bar. AZ strengthened their attacking options by bringing in Wout Weghorst, who came on for midfielder Stijn Wuytens, while Jürgen Locadia made way for Daniel Schwaab. De Jong could and should have killed off the game on 75 minutes, but missed a sitter from Hendrix’s cross, with the goal at his mercy. De Jong played Narsingh clean through but the substitute could not find the target, blazing his effort over the bar. Narsingh found the back of the net but had his goal rightly ruled out for offside. AZ came forward in the closing stages, but PSV held on to secure a hard-fought, but deserved 1-0 win. 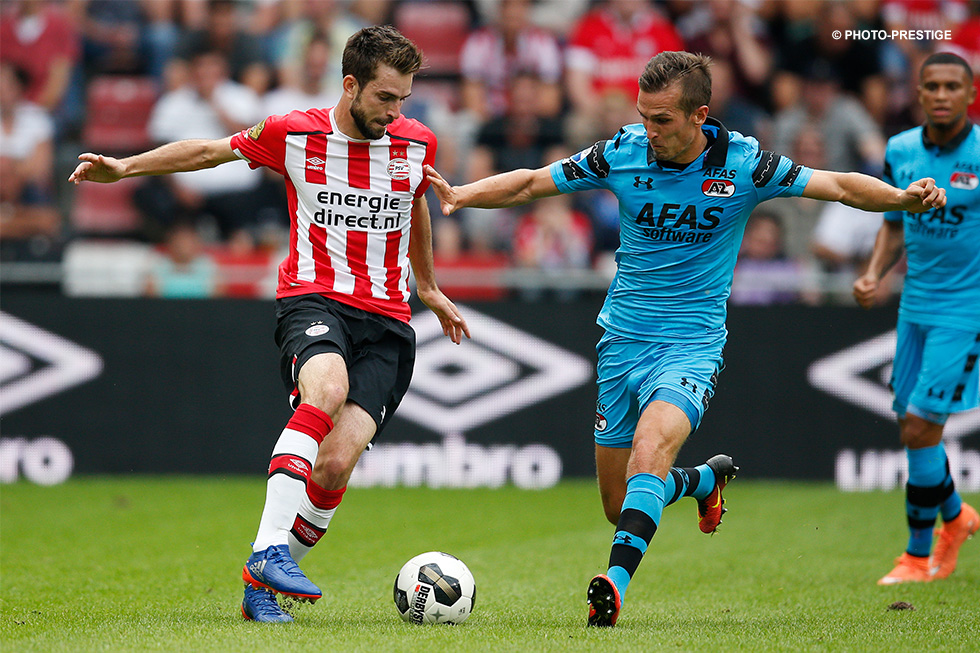 Pröpper vies for the ball with former PSV player Wuytens