Cody Gakpo bagged a brilliant first-half brace with a superb 16th minute strike before adding a second goal in the 29th minute. But Cyriel Dessers pulled one back for the hosts with four minutes remaining and stepped up to convert a controversial penalty in the last minute.

PSV lay siege to the Feyenoord goal
PSV went into the game knowing that leaders Ajax had been held to a draw by AZ in Alkmaar and that a win would put them within two points of their competitors. The Rotterdam Kuip was the venue for this crucial game. PSV immediately closed down Feyenoord all over the pitch and won a number of corners in quick succession, thanks to Cody Gakpo who wriggled his way past Feyenoord defenders. Mario Götze played in Ritsu Doan but the Japanese winger’s powerful shot from the edge of the penalty area was straight at keeper Ofir Marciano. PSV laid siege to the Feyenoord goal and Cody Gakpo, Ritsu Doan and Eran Zahavi had efforts on target, while Feyenoord were pinned back into their half.

Just reward
It had been coming and PSV rewarded themselves for their attacking style of play in the 16th minute. Joey Veerman played a long ball into the path of Gakpo, whose first touch was exquisite and left-footed finish was magnificent: 0-1. It was the PSV captain’s 20th goal of the season in all competitions. Feyenoord were made to chase the game but the PSV defence looked stubborn and Ibrahim Sangaré and Mauro JR blocked shots. In-form Gakpo doubled the lead in the 29th minute. He played a wonderful one-two with Eran Zahavi before superbly chipping Marciano: 0-2. PSV dominated first-half proceedings entirely and had deservedly taken a two-goal advantage at half-time. 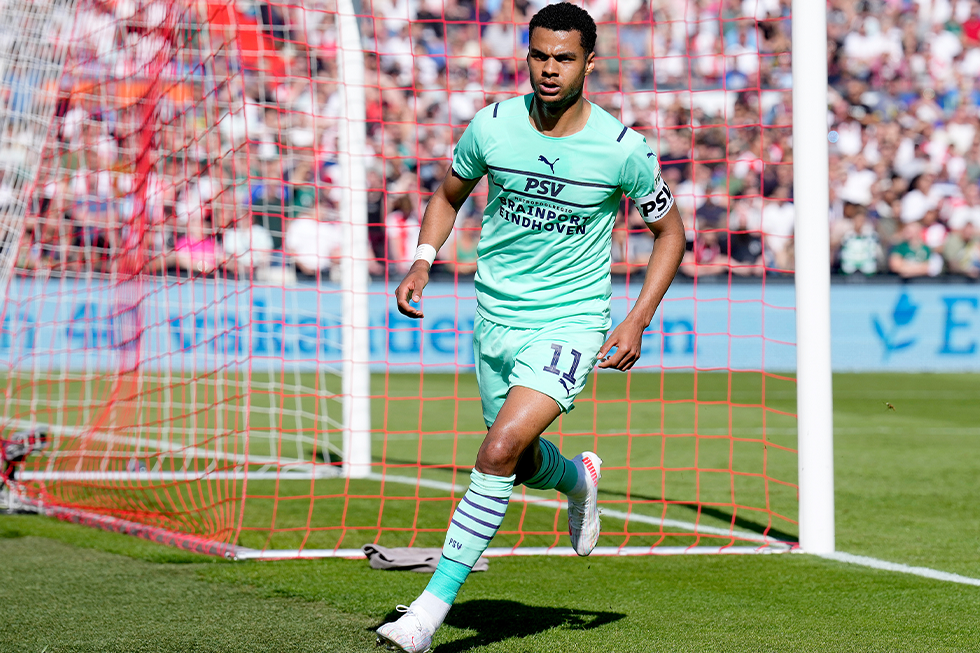 Dominant
PSV were unchanged after the break and looked to hold off the home side. Feyenoord coach Arne Slot had made a triple change at half-time and his team fought themselves into the game. At the other end, Joey Veerman forced Marciano into a save and Zahavi came close to scoring a third goal for PSV. He rounded the goalkeeper but was denied by a late challenge from a defender. Feyenoord put pressure on the PSV defence but Roger Schmidt’s team controlled the game also thanks to keeper Yvon Mvogo who made two vital phenomenal reflex saves. And Bryan Linssen hit the crossbar with a header.

Disappointing afternoon
It was still 0-2 with five minutes remaining. Jordan Teze and his partner in the heart of defence Erick Gutiérrez, who had moved back again, were the leaders of a solid defence as PSV were heading for a massive win. However, Cyriel Dessers pulled one back for Feyenoord, heading home in the 86th minute and worse was to come in the last minute of the match. Toornstra unleashed a shot and hit Mauro Junior on the hand. Referee Serdar Güzübüyük pointed to the spot. VAR did not intervene and Cyril Dessels stepped up to convert the controversial spot kick to make it 2-2 and cap a disappointing afternoon for PSV. With two games to come, PSV are still second in the table, four points behind Ajax. 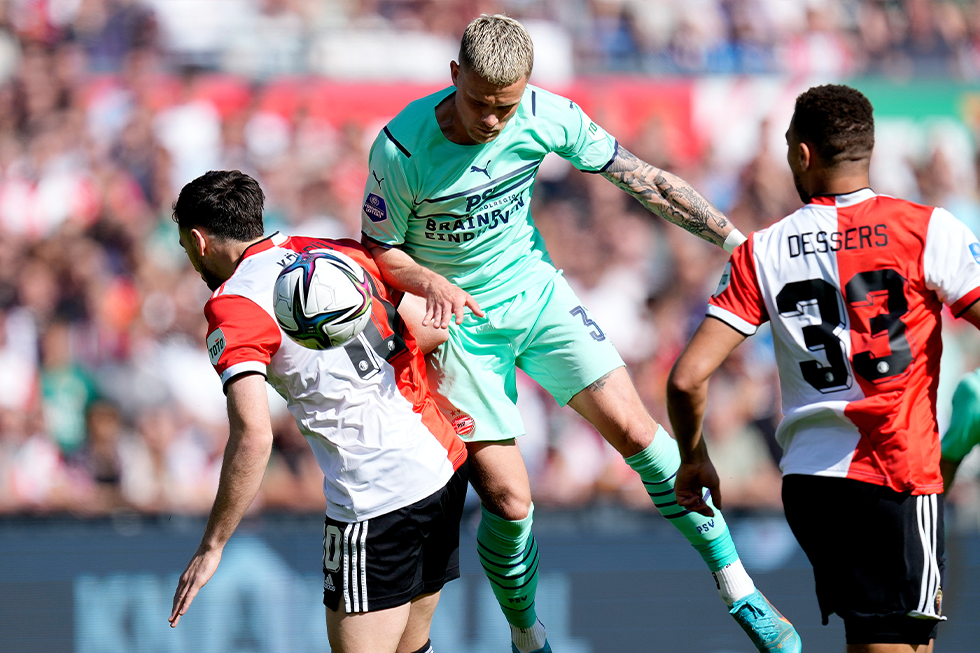