Romário is back in Eindhoven and that’s why we look back at one of the greatest displays of attacking football produced by the man who built his reputation as one of Brazil’s footballing gods.

Eredivisie champions PSV faced Steaua Bucharest from Romania in the second round of the European Cup I tournament thirty years ago. A 28, 000 crowd saw PSV cruise to a 5-1 win against the Romanian giants in one of the greatest PSV matches of all time. Romário,  one of the greatest forwards of all time, carved another piece of history in his remarkable career.

Guus Hiddink
Romário was late when Guus Hiddink unveiled his game plan for PSV’s league game against FC Twente, three days ahead of the crucial clash with Steaua Bucharest and asked the Brazilian to leave. It was actually just a matter of a few seconds, admitted Hiddink later, but the PSV manager was unrelenting. PSV recorded a 3-0 win over FC Twente and PSV, including Romário, held a training camp the next day to prepare for the Steaua Bucharest clash. The Romanians had won the first leg 1-0. Romário and Hiddink did not exchange any words but the Brazilian saw his name on the team sheet in the dressing room, in Hiddink’s handwriting. Romário striker, it said. 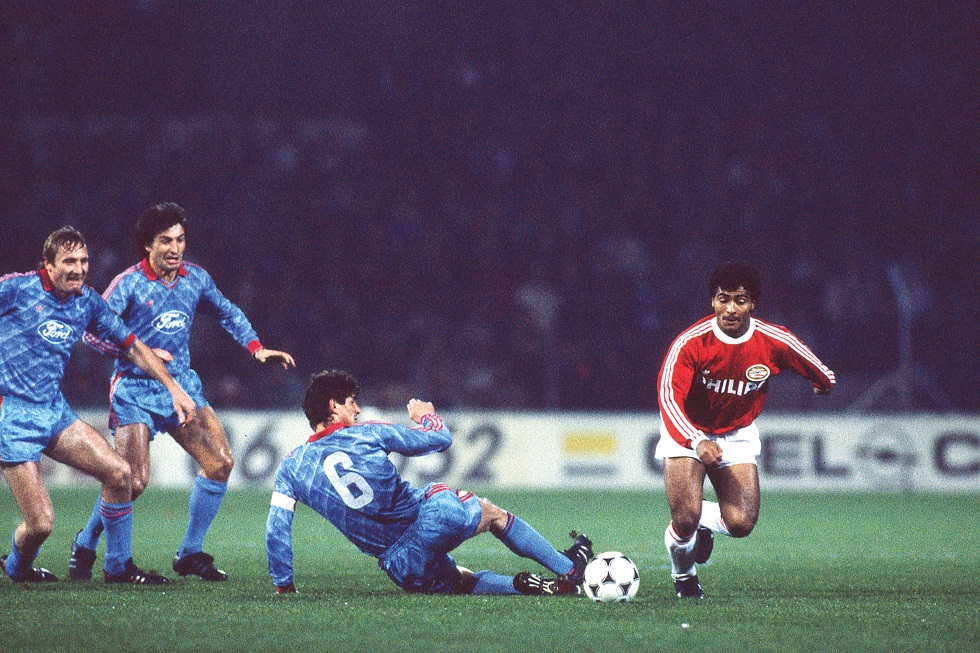 ‘O Baixinho’
PSV got off to the worst possible start against the Romanians, with Marius Lacatus, who has scored the only goal in the first leg, opening the scoring for the visitors on seventeen minutes. Juul Ellerman pulled a goal back from a free kick four minutes later but PSV really got going in the second half, inspired by ‘O Baixinho’, Portuguese for ‘the little one.’ Romário. 1, 69, headed home Lerby’s cross two minutes into the second half and two minutes later the Brazilian netted yet another goal. He superbly controlled a long ball, rounded goalkeeper

Silviu Lung before accurately slotting the ball home between two defenders. The Philips Stadion erupted into deafening cheer, saw Dutch radio reporter Evert ten Napel in the press box. “The atmosphere is absolutely electrifying, here in Eindhoven.” And when Ellerman had made it 4-1 for PSV with a delicious lob, Romário thought it was time for his defining moment at PSV.

A wonder strike
Romário started a mazy solo run past Steaua Bucharest defenders Stefan Iovan, Nicolae Ungureanu and goalkeeper Lung before putting the ball into the empty net to create a jinking masterpiece. The Brazilian star had completed his hat-trick, the third of which was ‘without a hint if imperfection’ as a British football writer put it. “It’s a wonder strike”, said Ten Napel, “Iovan Ungureanu and Lung have no idea what was going on as the house comes tumbling down.” PSV were through to the quarter-finals and Romário was given a standing ovation as he left the pitch in the closing stages, giving the thumps-up signal to his coach. “It was a goal from a comic book,” said Hiddink, while goalkeeper Hans van Breukelen said: “Romário was a genius but that was something that even geniuses couldn’t manage.”

Perla Nera
Romário wore black Lotto shoes in those days, called Perla Nera, which means ‘Black Pearls’. The Brazilian scored 127 goals and 143 matches for PSV and his boots are on display in the PSV Museum, in front of a large picture of Romário, taken during this most memorable game with the Romanians.