Hendrix makes comeback for PSV U21 in 1-0 defeat

PSV slumped to a 1-0 defeat against Ajax U21 in Amsterdam on Friday evening. Striker Sam Lammers thought he had opened the scoring for Pascal Jansen’s team, but his goal was rightly ruled out for offside. Jorrit Hendrix made his comeback after two months on the sidelines with injury.

The home side were the better team
PSV U21 started brightly in Amsterdam and Beto da Silva, who bagged a brace last week Friday, had a chance to open the scoring on just ten seconds. The hosts produced their first goal threat in the 20th minute, when Clement hit the bar from long range. The Amsterdam outfit gradually started to take control and pressed high on the field. Yet Rosario had a great goal scoring opportunity for PSV U21 on the stroke of half time. Lammers had played him clean through, but, one-on-one with Ajax U21 goalkeeper Tim Krul, he skewed his effort just wide. HT: 0-0. 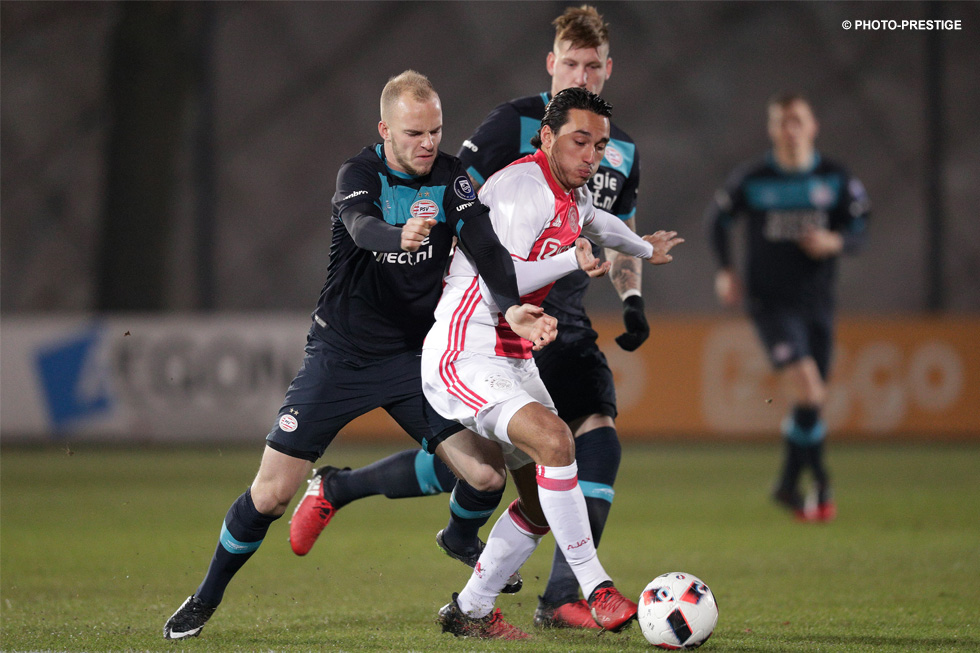 Jorrit Hendrix made his comeback on Friday evening after two months on the sidelines with injury.

Sierhuis made the breakthrough for Ajax U21
Nothing much of interest was going in the opening stages of the second half. Lammers thought he had opened the scoring for Pascal Jansen’s team on 50 minutes, but his goal was rightly ruled out for offside. Barely five minutes later, Sierhuis made the breakthrough for the home side. Hendrix had gained game time and was taken off on the hour mark, making way for Duarte. Ajax U21 had a good chance to double the lead but PSV survived the scare and stayed in the game. Lammers sent a header wide from Abels’ cross with ten minutes remaining. Neither team had chances in the closing stages. FT: 1-0.