Luuk de Jong´s hat-trick secured a 4-2 win for PSV over AZ at the AFAS Stadion in Alkmaar on Friday evening as PSV extended their winning run to ten games.

PSV got off to a dream start
PSV got off to a dream start and were two goals up in no time after goalkeeper Jeroen Zoet had made a double save in the first two minutes of the match. Georginio Wijnaldum had an effort parried by AZ keeper Esteban, but the ball fell to De Jong, who calmly slotted home the rebound on three minutes: 0-1. Phillip Cocu´s side doubled the lead five minutes later when De Jong towered highest in a congested penalty box to head home direct from Jetro Willems´ corner: 0-2. AZ were hanging in the ropes and Memphis was close to scoring a third gaol twice. John van den Brom´s team bravely fought back and Zoet was forced into a save to deny Berghuis. The hosts pulled a goal back in the 40th minute through Markus Henriksen, who finished off a well-worked move. Half-time score: 1-2. 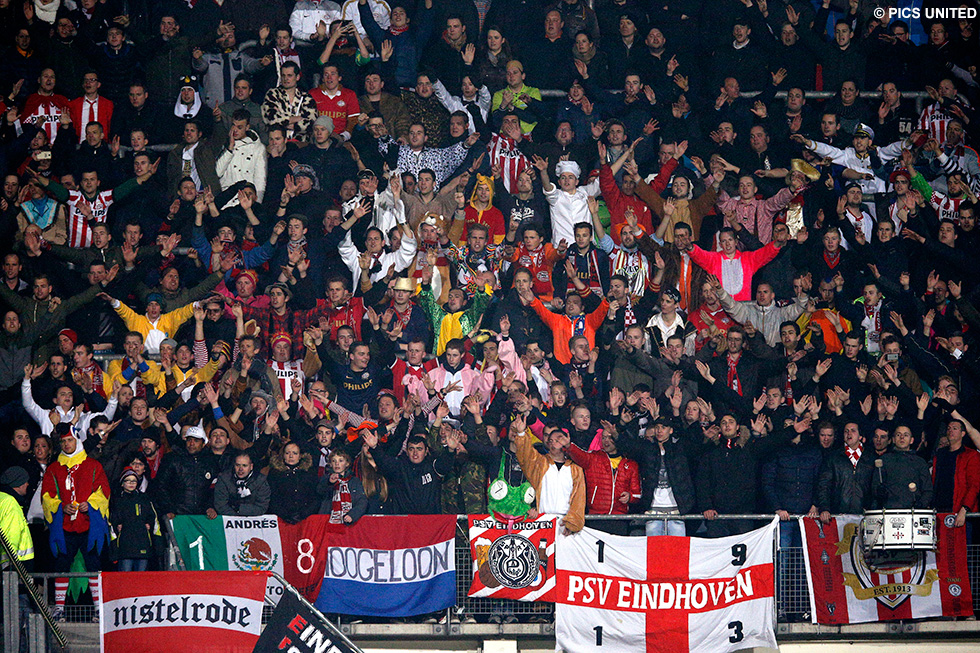 The away fans got behind their team in Alkmaar, many of them dressed in Carnival costumes | © Pics United

De Jong completed hat-trick
The second half was just as thrilling and cracking as the first period, with plenty of end-to-end stuff and chances. Four minutes into the second half, it was all square again when Berghuis delivered a cross from the right that Robert Mühren fired in at the near post: 2-2. AZ wanted more but were caught on the break twice in quick succession. Georginio Wijnaldum, left unmarked, scored a captain’s goal to regain the lead for PSV on 58 minutes, converting Jetro Willems´ inch-perfect cross from the left: 2.-3. Barely two minutes later, De Jong completed his hat-trick by putting a cross from Luciano Narsingh past Esteban: 2-4. AZ  refused to throw in the towel and had chances to reduce the deficit, but Muamer Tankovic sent an effort just wide of the post. PSV comfortably held on in the final fifteen minutes and had plenty of chances to earn a three-goal advantage but Narsingh lashed his shot straight at Esteban. Final score: 2-4.

PSV equalled a club record
Following the 4-2 away victory in Alkmaar, PSV have equalled a club record of ten consecutive wins, set in the period October 2009 to January 2010. PSV continued their unbeaten run after the winter break and extending it to sixteen games in a row. They last suffered a 1-0 defeat at sc Heerenveen.