PSV are saddened to learn that Pim Doesburg has passed away at the age of 72. The former goalkeeper made 264 appearances for PSV.

Sparta and PSV
Pim Doesburg had two spells with PSV. He was their first-choice goalkeeper from 1967 to 1970 and from 1980 to 1987, making 264 appearances in all competitions. Doesburg, born and bred in Rotterdam, played for Sparta Rotterdam from 1962 to 1967 and from 1970 to 1980 and is regarded one of the greatest in Sparta’s history.

All-time record
Doesburg played for two clubs: Sparta and PSV. He made a move from Sparta to PSV when he lost the battle with Jan van Beveren for the number one shirt. When Van Beveren made a move to Eindhoven, Doesburg returned to Sparta. He re-joined PSV to succeed Van Beveren and only retired at the age of 43. All in all, he made as many as 687 Eredivisie appearances, holding the all-time record for the most competitive appearances.

Two Eredivisie titles
Doesburg did not experience PSV’s rise to the top in the Netherlands, but he became a key player after he returned to PSV and won the Eredivisie title in the 1985-86 and 1986-87 seasons. Doesburg earned eight caps for his country. After his career, he worked as goalkeeping coach with Sparta Rotterdam, Feyenoord and the Dutch national team. 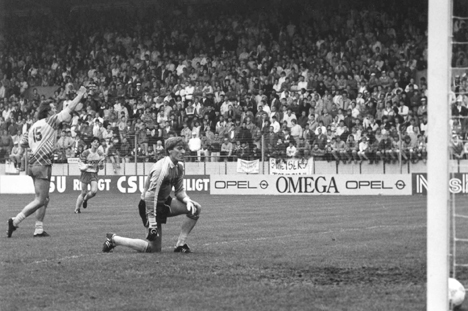