Cmiljanic struck twice in PSV’s U21 win over FC Eindhoven

PSV U21 striker Boris Cmiljanic struck twice either side of the break to give Pascal Jansen’s side a 2-0 over town rivals FC Eindhoven at De Herdgang training facilities on Friday night.

Cmiljanic headed home the opening goal
PSV U21, without Bergwijn, who pulled out of the starting line-up after getting injured in the warm-up, got off to a perfect start against town rivals FC Eindhoven. Cmiljanic, PSV U21’s tall Montenegrin striker, was left completely unmarked when he headed home from a corner on five minutes: 1-0. The home side wanted more and Boljevic came close to doubling their lead. He cut inside the box from the left and aimed at the top right hand corner but his kick whistled an inch over the bar. FC Eindhoven defender N’toko had the biggest chance to level when he sent a header straight at PSV U21 goalkeeper Remko Pasveer. 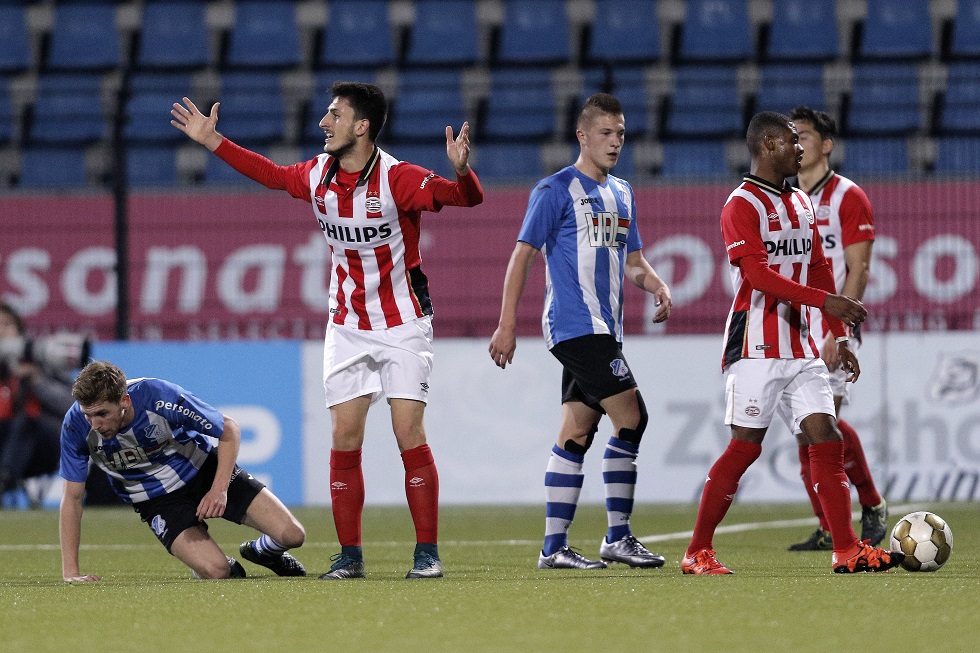 Pasveer
PSV U21 continued forward after the break. Rommens drove just wide from long range and Beto da Silva missed a big chance, putting a free header straight into the arms of FC Eindhoven goalkeeper Swinkels. At the other end, the visitors won a free kick when Pasveer was forced to catch the ball with his hands after a poor back pass from De Wijs. All eleven PSV U21 players defended on the line and managed to avoid the upset of a late equaliser. Cmiljanic put the result beyond doubt with three minutes to go, running onto Beto da Silva’s clever through ball before slotting home: 2-0.